How We came to be
Our story of how Cassie, once an orphaned street dog, came to be the the love of our life and centre of our family, and how this sparked the idea of The Treat Pantry.

I suppose this is the space where we talk about our love of all natural, healthy pet treats, and if you get all the way to the bottom, we will!

So how did The Treat Pantry come to be? What we didn’t really understand until we started discussing this story was that it began in Hungary in the late summer of 2016 (bet you weren’t expecting that).

There are many wonderful organisations out there who make it their mission to take dogs from terrible living conditions on the streets of countries around the world, to give them the opportunity of love, warmth, and care in their “Forever Homes”. This is how we are to begin our tale, and it starts with a lady and the tramp style beginning. 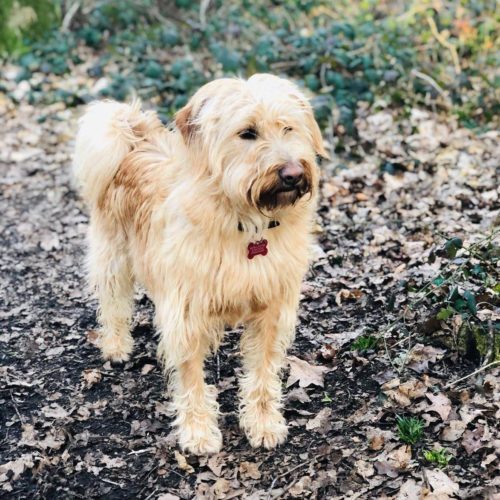 The fur lady of our journey is a dog breed that not all of us are familiar with, a pedigree blonde Hungarian Puli (Pulik), renowned for their brains and skill as herd dogs, but mostly for their coats (like Dougal from the Magic roundabout). Basically smart, bossy and covered in dreadlocks.

She later received the name of Blondie, we have no idea how a pedigree Puli (Pulik) ended up wandering the streets, but that is where she met the love of her life – a street dog who is a bit of a patch-work quilt, part Kritikos Lagonikos (Cretan Hound), part Smooth Fox Terrier and half everything else.

One thing lead to another and our Lady Blondie was now expecting 6 little ones. It was at some point in the future that she met the people who would take her somewhere safe for her to deliver her pups.

Sadly after bringing six gorgeous boys and girls into the world she passed to doggie heaven. The pups were set to live together for the for the next nine months, it was at this point when Bella, possibly the more inquisitive of the pups was picked to be the first of the Blondie Pups to make the long road trip to Britain.

It must have been a tough journey for a pup who had just been split from her pack, and probably never been in any sort of vehicle at this point, but she finally made it to her foster carer and only a 30 minute walk from where we lived.

We ran a Pub for 12 years, and as with many working families, battled the idea of a dog, and how it could work in our life. Having grown up in the pub industry we weren’t sure how we could allow a pub dog in our pub as it was very family orientated, the doors were propped open all summer, and it would be difficult to ensure a dog’s safety without putting it in a pen all day, that wasn’t an option, so we decided that we would have to wait until our situation changed (much to the disgust of the kids).

There is a local rescue centre not far from our pub, and throughout the summer some of the people from it would bring up fostered dogs to view them in a different setting, that is how Bella came into our lives. One evening I saw a pretty little blonde dog sat waiting for it’s owner to return from the bathroom, and thought it looked a bit uncomfortable, sat very sweetly staring at the door where her human had vanished into. I offered her a treat and was taken aback as she took it from my hand and placed it on the floor. As her human came back I said that it is an odd thing for a dog to do, she told Bella it was OK, so she took the treat. 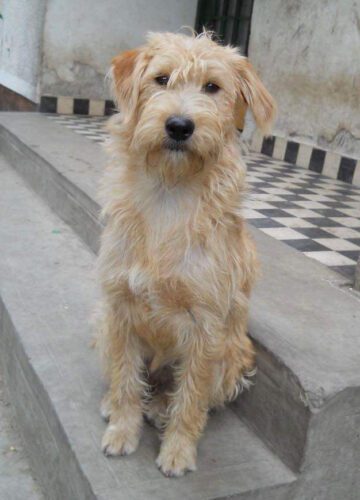 I complimented her on how well trained her dog was, and that’s when I discovered that she had only had her a few weeks as a fosterer, this just seemed to be in the dogs nature. I grew up with a lot of dogs in my childhood, and this was not something you’d see often in a dog. As the night went on I became more curious, she seemed so at ease with herself even though you could tell she was nervous. Every instinct in me was saying this dog was different enough to be the solution to our situation, there was an unusual bond with us……by the time Bella left, I knew our home was going to be her “Forever Home”.

We spent all morning frantically trying to contact her Fosterer, and eventually filled out mounds of paperwork and applied to adopt her. We met her a couple of times over a short period and realised she was perfect, we could set out the rules, and she’d instinctively know what to do, no going behind the bar, staying by our side, laying on her bed while we were working, we couldn’t believe how attuned she is to what people want of her.

So the day came for her to move into her forever home, the children wanted to give her a new name for her new life, so from then on Cassie became the newest member of the family. She settled in well and enjoyed the surroundings of the pub, with all the staff and locals she became part of a large pack, but always maintained that us 5 were the centre of it.

When we officially took her on there was a group of people sat near us, they came in the Pub regularly enough for me to know them, little did I know that our links were about to get much stronger. They loved Cassie and enquired about any other dogs that may be up for adoption, that’s when we discovered that the rest of her pack were on the way over, she was soon to meet her brothers and sisters again. 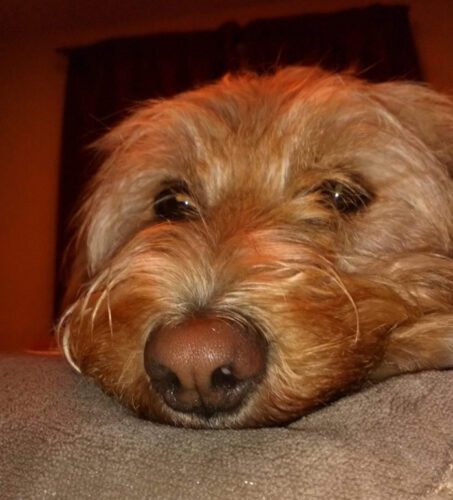 When we met the others we could see that they were a bit nervous, growing up in a pack with no adult dog had left its mark, Cassie knew she’d be staying with us, and although interested in them, she seemed happy to leave it like that. She sees her brother Jack most as he is with the family I mentioned earlier, and she definitely acts differently towards him than other dogs she meets.

We were adamant that Cassie would have the right food in her life for 2 main reasons, first was obviously her health, and second was to reduce the temptation to scavenge in the pub, generally speaking , if a dog has all the nutrients it needs, it will be less likely to ‘top up’ although there are exceptions to this! After taking the time to slowly introduce her new food, and making her realise that there weren’t other dogs around wanting to eat her food, she (and her digestive system) settled down.

As she got used to her surroundings it wasn’t long before she started spotting the locals who she could convince to grab a biscuit from the jar on the bar. That’s when we started noticing that the condition of her belly was going backwards. We were amazed by the lack of concern that surrounded the production of treats for dogs. So we told all the locals off (it stopped some of them) and started making sure that there were healthier treats around for her, but even then there were always additives of one description or another (even if it was just salt), and the shelf lives were far beyond anything reasonable for a natural treat. It was very hard to find healthy, wholesome treats on the shelves.

That was when we went for our daily walk that would never be forgotten, I remember we were talking about finding a way that we could control the treats Cassie gets, ones she would also like, when we heard a whimper from behind us, Cassie came back onto the path and just flopped onto the floor, to say we were confused is an understatement, she was just sitting there looking at us, but there was something different about her, we went to her and whilst looking at her paws we saw the end of a stick protruding from her chest and as I touched it I realised it was deep in her chest. We went into emergency mode, my wife ran the mile back to get the car, and I started to walk in the opposite direction carefully and slowly carrying Cassie just over quarter of a mile, cradled like a baby, to the road.

The next few hours were manic, but thanks to the phenomenal team at our vets, and a dog who doesn’t seem phased by anything, she overcame the foot long wound caused by the 9” stick, and the collapsed lung. Within days we were trying to stop her running around the place.

The biggest thing that came from that scenario was how we felt while she was being operated on, we hadn’t realised how much she meant to all of us, in just over a

year she had made her mark on us. We were devastated at the prospect of losing our fur baby, and vowed to give her nothing but the best.  We started making her treats with raw fish to help her skin heal, iron filled liver treats to help her internals repair and protein packed chicken breast pieces to help repair her muscles. 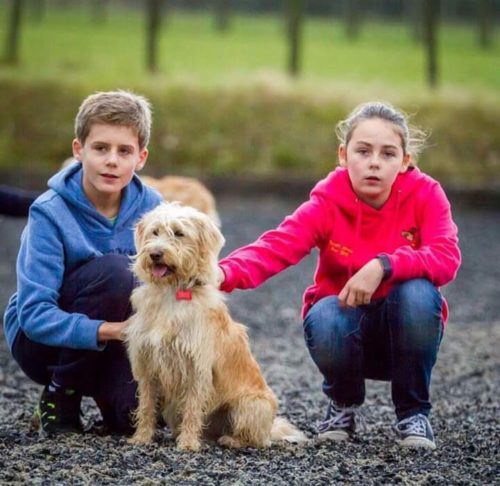 This was so important because she wasn’t allowed to exercise, so everything was low fat, and a decent chewy treat would allow her to keep occupied, chewing makes dogs happy.

So, The Treat Pantry was born, why keep these wonderful healthy treats just for Cassie? As business people with commercial catering experience, it didn’t take much for us to start looking at ways to get great, healthy, additive, grain, and gluten free snacks to as many pets as we can.

So here we are, after a year of testing and planning, we left the pub, the only home our kids knew, and a whole new concept for Cassie, but something we are passionate about. That was the early spring of 2020, a notable point in recent history, but we are going from strength to strength, always looking out for more wonderful snacks for your Pooches.

With Cassie being our chief Taste Tester – her favourite dog treat is chicken hearts, we are sure she will only give the paws up to the best treats, and we hope that you and your four-legged friends will join us on the rest of our journey.

We use cookies to ensure that we give you the best experience on our website. If you continue to use this site we will assume that you are happy with it.AcceptPrivacy Policy